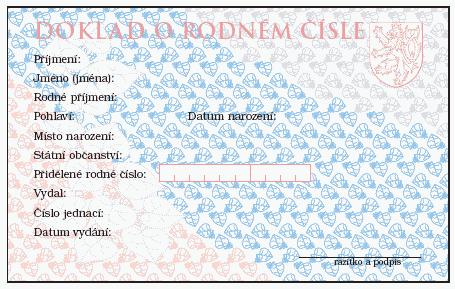 What is a Czech birth number?

Czech birth number (Czech rodné číslo) is a personal identifier composed of 10-digit numbers divisible by 11 with no remainder, with the first two numbers being the last two numbers of the person’s birth year, the third and fourth numbers being the month of birth (for women we add 50 to that number, for example, if a female assigned at a birth person was born in June, her second two numbers are 06+50 = 56) and the fifth and sixth numbers are the date of birth. Therefore, for a female assigned at the birth person who was born on the 12th of February 1975, the first six numbers would 755212. The purpose of the last four numbers is to differentiate between people born on the same day and can be anywhere between 0000 and 9999.
People born before 1.1.1954 had birth numbers with the same structure but only 9 numbers overall and it was not divisible by 11.
The birth numbers appointed in Slovakia before 1.1.1993 are also accepted as birth numbers as long as they meet the requirements mentioned above.

What is the purpose of a Czech birth number (Czech rodné číslo)?

It is a personal identifier, showing the date of birth and the sex of the person it belongs to. It is listed for example on the Czech identity card. Banks often require a birth number to open a bank account. Similarly, it is used as the insurance number for both health insurance and social security. Since these birth numbers are considered to be personal information, they are following the regulations on data protection and privacy and can only be used with the owner’s consent.

Who can acquire a Czech birth number (Czech rodné číslo)?

In the Czech Republic, the birth numbers can be appointed to:

Who appoints the Czech birth numbers?

If you are born in the Czech Republic, you will be granted a Czech birth number by the Registry Office. If a person with Czech citizenship is born in a foreign country, they need to contact a specialized Registry Office.
If you are an inhabitant (a citizen of the Czech Republic, an individual who has since lost their Czech citizenship, or a foreigner who is a family member of a Czech citizen), a foreigner without a residency permit or a residency permit for a stay shorter than 90 days and applying for the birth number because of study or employment or an individual whose birth number has been requested by the Czech Social Security Administration or the District Social Security Administration, you will need to contact the Ministry of Interior - Department of Administrative Activities.
Lastly, if you are a foreigner with a residency permit or a foreigner who has been granted international protection through asylum you will need to apply at the Ministry of Interior –Department for Asylum and Migration Policy.
If you need help arranging your Czech birth number please check our service package!

Get professional support from Pexpats